Before Christmas, I stumbled across Tilly & The Buttons’ free snuggly slipper boots pattern, and thought they would make a great Christmas present for Luke. He’d been wanting slippers for some time, but a) he’s quite picky about what he wants in a slipper and b) he has large feet, so he had’t had much luck finding any. So while he was at work, I scurried off to the library and printed the pattern out, then went to Eurokangas and rummaged in their remnants bins for the right fabric. I bought some soft fleece, and then I found some leather with a thick fleece lining that I thought would be perfect for the soles. And then, I pondered how exactly to make them. Tilly’s pattern has a lining, but I dismissed that straight away because I figured it would come out every time you took your foot out of the slipper, and who wants that? I wanted to find a way to have them still look nice when cuffed, and be sturdy enough to hold their shape, AND have the fleece of the leather against the foot. I thought about interfacing the fleece, but decided on just doing a double layer of it, and basting them together to use as one piece. I cut separate pieces for the cuff, so the seams would be encased inside and not on display when cuffed, but then I didn’t use them at all because the boots were tall enough without the cuff (and I knew Luke would never bother cuffing them anyway, honestly). 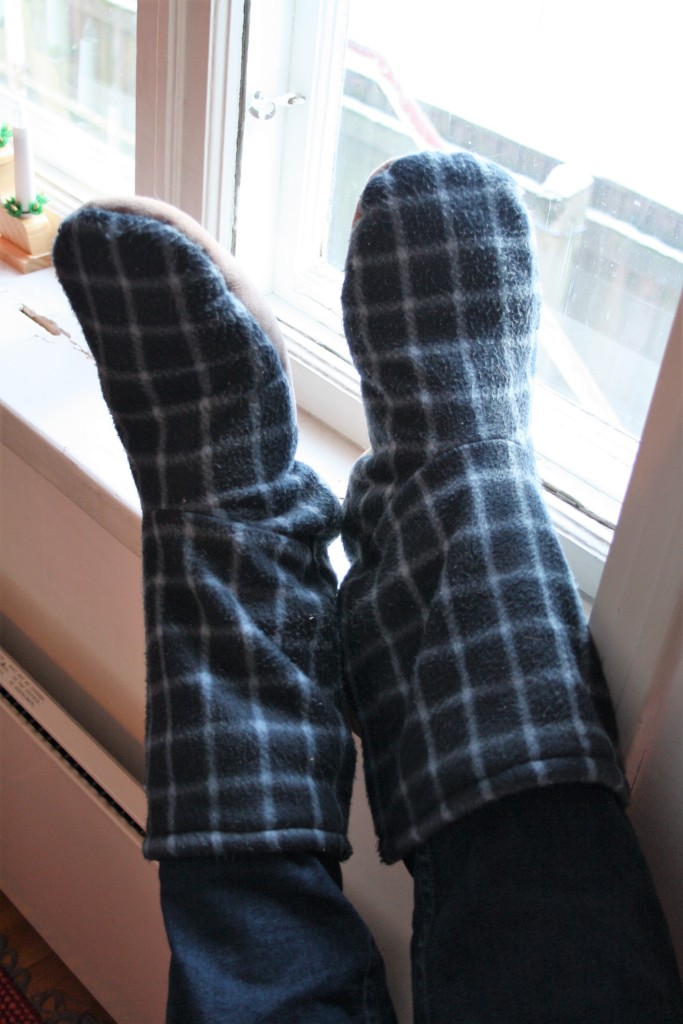 I had to enlarge the pattern first – as I said, Luke has big feet and he wears a size 45 or 46 in European shoe sizing. So I got his gumboots and traced around those, and then enlarged the length of the sole piece by 4 cm (and then all the corresponding pieces that join to the sole!)

For the sole, I just cut one piece of the leather/fur fabric, and then I “shaved” the seam allowances to make it easier to sew. There was fur everywhere! It looked like I’d murdered a teddy bear. I assembled the boot as per Tilly’s instructions, minus the lining. I was worried my machine wouldn’t like sewing the leather/fur, but actually it went quite smoothly. Then I just folded the fabric twice on the top of the boot and topstitched it down. Bam, done! 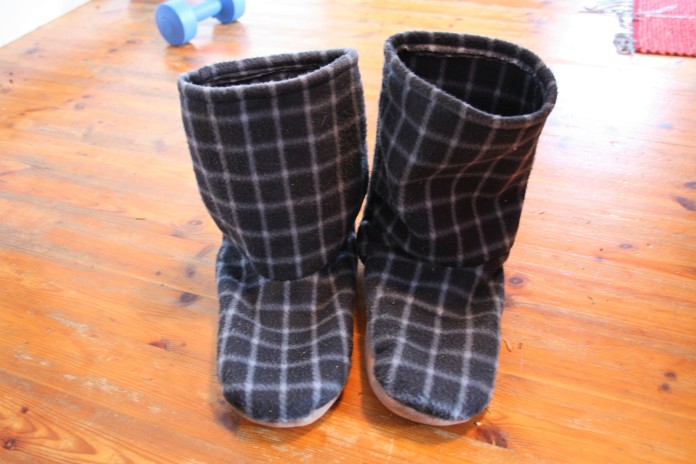 In continuing the theme of keeping Luke’s feet warm, I decided to knit him a pair of socks. Handknitted woollen socks are a Big. Deal. here in Finland. Everyone has them, knitted for them by mothers, grandmothers, friends (or themselves) and they swear by them in winter to keep their feet warm inside their boots. I bought a knitting magazine from Novita, one of the bigger yarn/pattern retailers here, because they had a “my first sock” section, complete with diagrams and a link to a video. I wanted to use a Finnish pattern – I don’t know why, my life would have been much easier if I’d chosen an English pattern, especially since I’d never knitted a sock before, or used DPNs. Nevertheless, I painstakingly translated the pattern as best I could, and got to work.

The yarn came from Finnish sheep – I went to a sheep event with Luke’s supervisor and bought two skeins of yarn from one of the vendors there. It’s a wool/nylon blend designed for socks. It was a little greasy and smelled strongly of sheep, so they are very rustic socks!

They are not perfect – I’m sure any knitter would notice that the toe decreases are in the wrong spot on one sock. I got confused about which needle was which somehow, I don’t really know how. I also changed colours a row late on one of them, because I wasn’t paying attention. Still, Luke likes them, and he says they’re cosy! I already had to reinforce the toes though, because Luke feels like socks aren’t on his feet properly until he’s practically jabbing his toenails out of the ends. His store-bought socks always get holes in the toes very quickly!

I made my own “sock display” things out of a spare foam exercise mat that Luke had already cut up to reinforce his backpack (hence the little bit of blue you can see poking out of one sock), because I don’t want to pay 20 euro for a pair of sock-shaped pieces of plastic.

Any tips for sock knitting? I’ve heard about so many things, like toe-up, afterthought heels, and of the course the debate over magic loop versus DPNs. I’m slowly working on a pair of Kalajoki socks for myself, but I’d love to hear your favourite patterns as I want to increase my sock stash, stat. And I’m a bit shit at using it, but I’m whimsicalkitty over on Raverly if you want to add me there 🙂