My other recent successful make has been the Wanted tee by French pattern designer Vanessa Pouzet. I bought a pattern from her ages ago which I’ve never used (La Petite Robe, which I now see has an English version!), but in doing so I subscribed to her mailing list and when this slipped into my inbox, I was sold, even though it’s currently only in French. I love the square neckline! I have to say I think it looks better in person than it does in these photos, though. 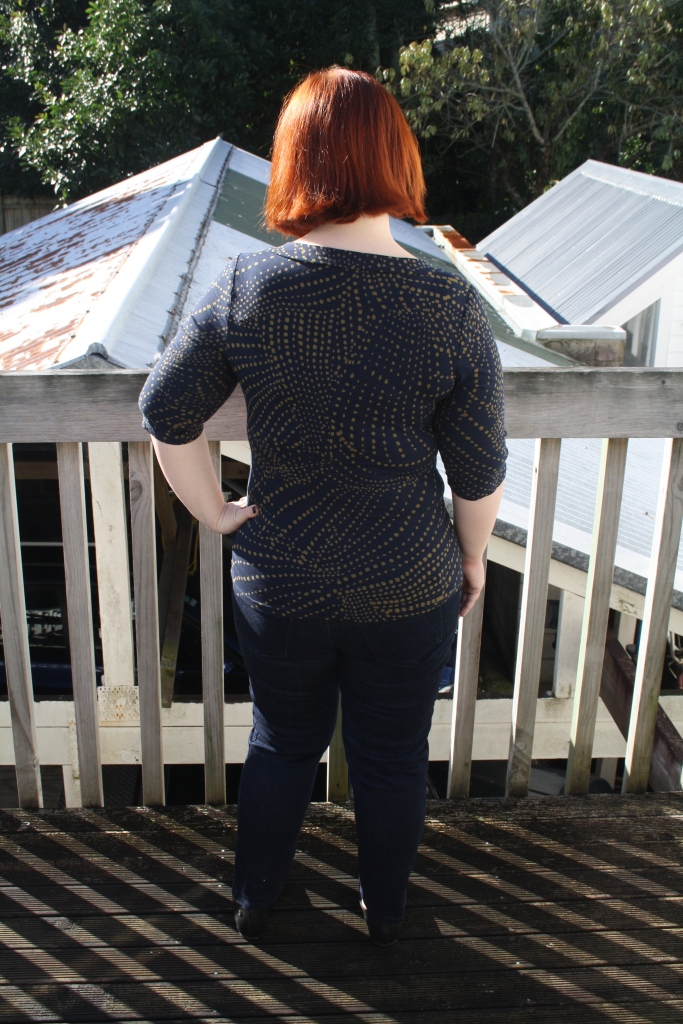 I made it from a deliciously soft viscose knit remnant I got from Centrepoint Fabrics. It pressed really well, which was nice when doing all those sharp corners. I was a bit terrified of making this pattern, I must admit – my French is basically restricted to greetings and terms for baked goods, due to choosing Chinese over French when I entered high school. However, Google Translate does a very good job of translating it without many mistakes, and the diagrams that come with the pattern are very clear and easy to follow. The neckline is actually very easy to sew, to my surprise. I made a practice one in a fugly knit remnant I got from an op shop, and then felt confident enough to cut into the good stuff.

I made it in a size 46, and after measuring the sleeves against the Papercut Ensis tee, decided to do a little 2cm full bicept adjustment for a wee bit more ease in the arms. This knit is nice and stretchy, so that adjustment may not have been strictly necessary as it turns out. I chose the “retro” sleeve length, as the 3/4 length sleeve was nearly full length on me! It’s more modest than I was expecting, too – I was worried there might be more cleavage than I bargained for, but it’s just right in my opinion.

I think this will be a good staple pattern for me – I already bought some charcoal grey silk/merino knit to make another more sedate version to wear tucked into my skirts and with jeans as a basic layering piece, and a black and white Breton stripe to wear underneath a black jumpsuit I bought recently.